In social media I frequently come across posts celebrating the achievements of those who have lost a lot of weight since taking up running. Race and running brand ambassadors are often chosen for these inspiring stories and drastic before and afters. It’s amazing to see how far they have come. Their strength and dedication has paid off!

However, I want to dig deeper!

I feel that there are more stories about runners that need recognition as well. I’d like to hear more about what people have gained from running. The intangible benefits that cannot be seen or measured.

What I’ve found truly humbling is hearing stories of how running as helped someone shape who they are, shaped their lives, helped them overcome inner obstacles and become mentally stronger.

I am by no means an amazing runner. I do not have an impressive list of PBs under my belt or age category achievements. In groups people usually have to slow down so that I can keep up.

However, running was key to me finally discovering, in my thirties, who I truly am inside; realizing that I am capable of amazing things. Running gave me the strength to face a lifetime of internal struggles and gave me the confidence to push towards a happier, healthy life that I never imagined possible.

These sorts of achievements cannot be measured, but rather felt. These are the stories I would love to hear more of. But it will involve a certain degree of openness, shining the light on mental health.

From this I was inspired with the idea of starting a blog where we could share our own personal stories of the emotional and psychological benefits we’ve experienced thanks to running.

I have such a passion for creating more awareness and understanding surrounding mental health issues and how they impact our lives. And I love how running can be instrumental in changing lives.

So, if you would like to volunteer your story (and later on down the road provide updates too!) feel free to send me a message.

Here are some questions which you could either answer point by point or, alternatively, use as a base to help frame your own write up as another option too:

Responses can be sent to me by email [click here].

Unleash your creativity with your submissions too! You are welcome to include photos – perhaps it’s possible to see the inner glow running has given you. Plus, everyone has their own unique way of telling their story best suited to them – perhaps an audio file or video post would be easier for some than writing it all out.

I’m excited to see what we can come up with!

I’m excited to have finished my first month of daily workouts!

Each January Run Ottawa launches their running streak challenge, to help keep us motivated through those long winter days. Last year I’d just gotten a new treadmill and was excited to see how many days I could keep up. Unfortunately, I did hit a bad spot in my depression which caused me to stop running altogether before it ended. (I made it to day 18, missed two days, got four more consecutive days in, then I was DONE.)

This January I decided to attempt my own modified version of the challenge – where each day I would choose from either running, biking, or skating (which a Twitter friend amusingly referred to as the “Canadian Triathlon”, haha!). I allowed myself a minimum of 2k for running, 5k for biking, and 5k for skating. It was the perfect solution for someone like me as I was able to choose my activity depending on how my day unfolded, allowing me a bit more flexibility. 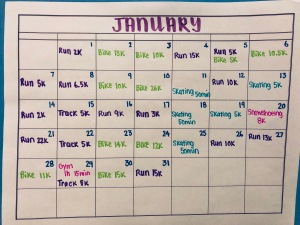 This is the first time I have exercised on a daily basis and completed an actual month-long streak, so I couldn’t be more pleased with myself!

I’m definitely liking being able to add cross-training to my training schedule! As I found out in my figure skating lessons – where you have to be able to perform the same moves on both your left and right sides – my left side is weaker/lazier, and so I will need to work on fixing this imbalance. This should hopefully help make me stronger as a runner as well as prevent injuries.

I have also learned the benefit of rest days. My speedwork training has actually worsened with each passing week, which I attribute to not getting a day off. I came in after long runs and lifting weights and my legs would have absolutely nothing left in them. No power whatsoever.

As I move forward, I will still have long run Sunday’s at Run Club and Speedwork Monday’s at the dome, but I’m hoping my legs will manage to (a) adjust, and (b) benefit from rest days earlier in the week. One can only hope!

It was May 1st when I finally accepted the fact that it was time for me to transfer from the 10k race I was originally registered for if I was going to attempt running the full marathon on Race Weekend.

May 28th was the big day, with our race starting at 7am. So I decided that I would take the car in favour of getting a bit more sleep. Normally I would have taken the bus, just to avoid the anxiety I get driving downtown, and with unpredictable road closures. So this was a big step for me! Turns out that this was the best decision, too! I hopped onto the empty highway, and straight into the City Hall underground parking lot! All of which couldn’t have taken me more than 15 minutes, and a mere $2 for parking. And then all I had to do is basically roll out of my car and onto the race course, because I was basically parked right at the starting line! Sweet.

With plenty of time to spare, I walked over to the Eagle statue at Confederation Park, where our Running Room group traditionally meets up for a photo together before the race.

This is where I found my 4:45 training group, and we decided to start the race off together. Many of us, myself included, intended to think of this race as another Sunday long run to enjoy, no pressure.

The first 10km started out brilliantly. We were jamming to the pop-up music spots they had on the sidelines, chatting, cheering, flirting with random men in uniform, and taking selfies. 😉 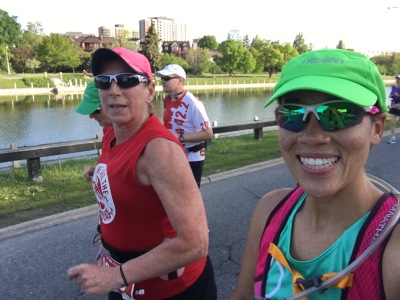 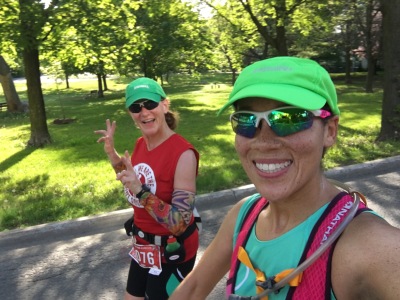 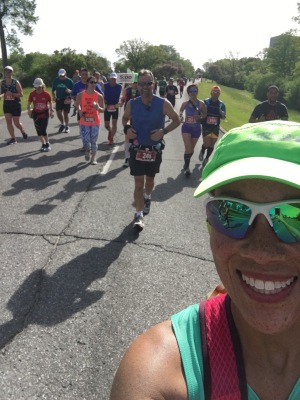 I also had the RTRT.ME app on me, which was so cool because it allowed me to track where all my running friends were located along the course as we were running the marathon!

It was once we hit the double digit kilometres that our group started to whittle down as some people fell back/were smart and pacing themselves for the first half. It was still early but already the day was starting to warm up quickly!

It was at the half-marathon point that it hit me. I started to get really lightheaded and nauseated and couldn’t even begin to imagine how I was going to complete that entire distance all over again. So I forced myself to take a walking break and eat some of the salty pretzels that I had thought to bring with me. (My stomach had angrily protested me consuming any more energy gels after the second one.) I also decided that I would stop at every water station and be sure to take multiple cups of water (in addition to the 2.5L of nuun on my back). The orange slices in particular were a welcome treat! I could’ve set up camp and eaten my own weight in those!!

I had a feeling it was the heat doing me in. After training in sub-zero weather for months, this was our first really hot day. And I had never done long runs in this type of weather before. So I was a bit out of my element. By 25km the migraine started kicking in, but I was determined that if I just ate enough pretzels and oranges and kept drinking all the liquids I would be fine! I was still keeping up a good pace. (Except for that moment when I stopped to look over the bridge, because I’m a sucker for anything to do with water, haha!) 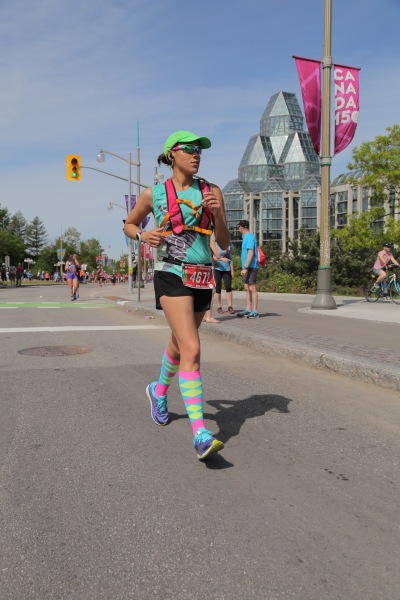 Towards the end, around Rockliffe Park, a girl came up to me while I was taking a walk break and said that she needed some support. Turns out she was a 2x Boston Marathon runner who had a baby 9 months ago, might possibly be pregnant again, and was definitely feeling it. We tried running a few times, as my technique was to run and take walking breaks, but she didn’t have anything left in her. It was at this point that she said I could go ahead and continue my run, and that she would probably just leave the race. In the end I decided that we would finish the marathon together. And, let me tell you, walking for me turned out to be a lot more painful than running!! At some points I had to jog slowly beside her just to take the edge off. While I was really disappointed to see my sub 5-hour goal go by, I’m happy that I was able to make a new friend and help her through a difficult time. We chatted and got to know one another, we cursed the heat and our aching legs – making the people around us laugh. 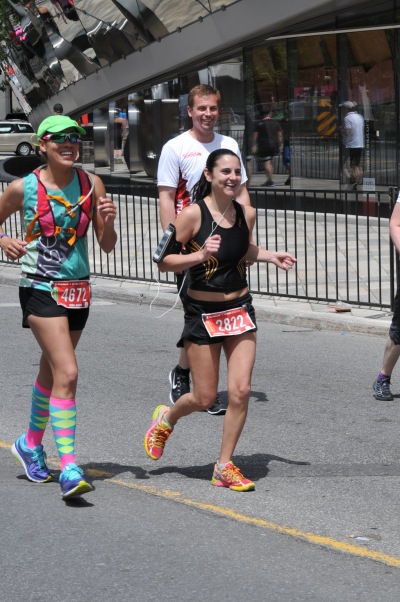 And she was truly impressed by all the Orleans Running Room support that we continually encountered along the course – “I don’t know where Orleans is, but it sounds great!”

We made it across the finish line together in the end! And, really, it’s the experience that matters most on race day. I couldn’t have asked for a more memorable first marathon. 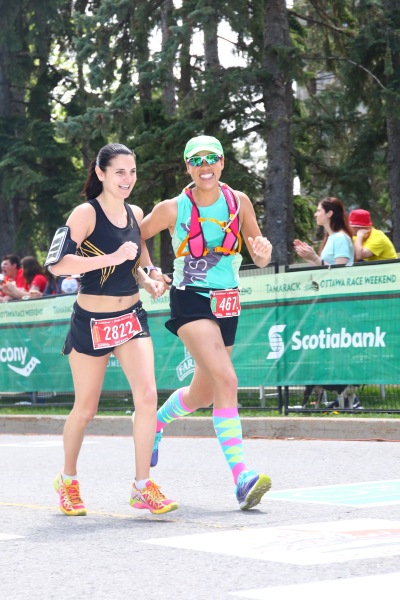 Here’s a quick video highlighting my first marathon; little clips recorded at certain mile markers. Upon looking back on the footage I was pretty amazed to discover that the two of us actually started out running the race together too and we didn’t even know it!! Amazing. 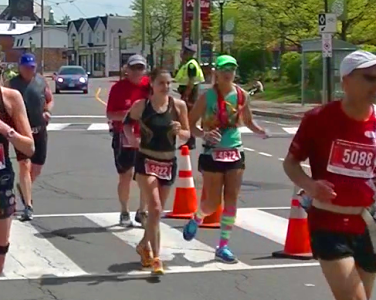 Possibly because of all the walking, and just taking the last half of my marathon so easy, I didn’t really have a recovery period afterwards. It really was just like a Sunday long run! I wasn’t stiff or sore the next day, and was ready to continue my training within a few days. So that was nice!

Still trying to figure out what my second marathon will be. I’m looking forward to hitting my sub-5 hour goal next time!! 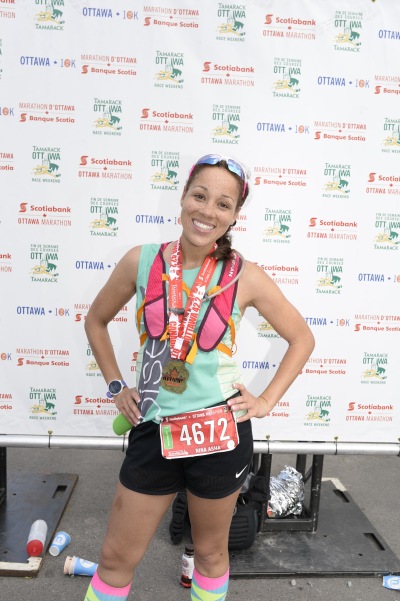 Above is a photo taken right after the race when I got my medal, and below is me at the Running Room Marathon Clinic party afterwards, where we celebrated graduating from marathon training! I’m standing with my wonderfully amazing group leader, Leslie. I couldn’t have done it without her!! 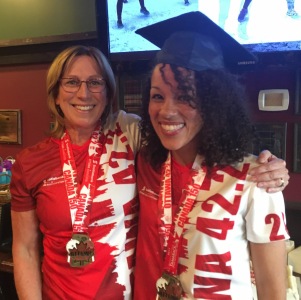